The new Dicastery for the Charity Services known as ‘Elemosineria Apostolica’ is the Holy Father special office for charity activities among the most poor, less advantaged and the most emarginalized across the globe. The Dicastery main objective is to administer, act and deliver on behalf of the Holy Father His personal financial budget dedicated for charity. 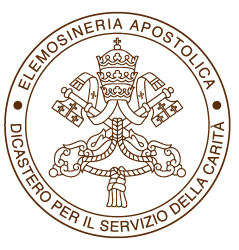 The Dicastery Head L’Elemosiniere of Pope Francis make possible with his daily activities the Holy Father special and direct attention as Head of the Universal Church towards those in extreme poverty, social exclusion and victims of natural disasters.
The Dicastery is in charge to receive and collect financial donations for the Holy Father activities and acts of mercy towards the most poor and in need.
L’ Elemosinere and Head of the Dicastery has also the mandate to issue the Holy Father Blessings Parchements for a list of occasions. The donations received from the issuance of the Parcements are all used for charity.
L’Elemosinere has the duty to use according the spirit of the Gospel all the donations received to help directly those most in need.
Pope Francis always higlights and remind all that the Church is similar to an ‘Emergency Field Hospital’ and therefore, the new Dicastery for Charity Services is the Pope First Aid Clinic always ready and equiped to assist those most in need.

The Office of Papal Charities is the department of the Holy See charged with offering charitable assistance to the poor in the name of the Holy Father.
This tradition goes back to the earliest centuries of the Church. Originally one of the immediate responsibilities of the Deacons, this duty was later exercised by one or more members of the Papal Household without any particular titular rank, something that was only granted later.  A Bull of Innocent III (1198-1216) mentions the post of Almoner as already in existence.

The first Pope to organize the Office of Papal Charities was Blessed Gregory X (1271-1276), who stipulated the duties of the Almoner.  In a Bull of 1409, Alexander V laid down guidelines and regulations for this Office, which has always carried out its work as an expression of the constant care of the Roman Pontiffs. The Almoner of His Holiness has the rank of Archbishop; he is a member of the Papal Household and as such takes part in the Holy Father’s liturgical celebrations and official audiences.

From 5th June 2022 following to the entry into force of the ‘Costituzione Apostolica Preadicate Evangelium’ on the Roman Curia and the Church service throughout the world, l’Elemosinera Apostolica is now changed as the Dicastery for the Service for Charity.
The Dicastery Head is the Prefect L’Elemosiniere of the Holy Father with Archbishop title.

As a means of helping to fund the charitable works entrusted to the Charities Office, Pope Leo XIII delegated the Almoner to grant the Apostolic Blessing by parchment certificate: to be authentic, these parchments must bear the Almoner’s signature and the embossed seal of his Office.

Please note that costs associated with the issue of the Papal Blessing are applied only to the preparation of the parchment and postage, and include a contribution to the Pope’s charitable works.

The proceeds accruing to the Office of Papal Charities from the preparation of Papal Blessing parchmentsare applied entirely to the works of charity which this Office carries out on behalf of the needy who appeal daily to the Successor of Peter for assistance.

The page you requested could not be found. Try refining your search, or use the navigation above to locate the post.